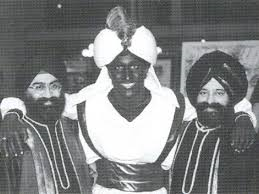 As the Canadian election heats up and so comes out the past objectionable images of Prime Minister Justin Trudeau. Trudeau’s 2001 picture of him darkening his face has made international headlines. Not only his rivals from political parties, but as well as others have labelled him from being as a racist to a fraud. The prime minister has apologized for his actions.

As a Journalist, I had the opportunity to meet and speak with Justin Trudeau before he became a Prime Minster, and I am convinced that he is not a racist! Since I have faced racism not only growing up in a small mill town in B.C., but also in my professional career in the media, I can sense racism or being unwanted from miles away.

Did Trudeau make a bad judgment call when he was a 29 years old math and drama teacher by darkening his face at this cultural event? Yes, he certainly made a bad judgement call! This cultural event that took place almost two decades ago was organized by volunteer parents at the West Grey Point Academy in Vancouver. Unfortunately then the attitudes toward Canadians of colour were much different than they are now.

Indeed, this image has hurt many Canadians of colour and has brought up bitter memories for me as well. During my high school in the late 1970’s one of my teachers would remind me time after time that I should not bother to improve my English as an ESL student because my career was already chosen to be a mill worker.

Then in the late 80’s as a radio broadcaster I had to change my name to Tony Gill from Gobinder Gill because a large number of listeners wanted me off the air.

In 2019 we need to look all this fiasco from different lenses. Then hardly any Canadians, unless one was from the visible minority groups, thought anything wrong with one darkening their face, but today it is frowned upon.

In all of this there is an underlying message which is that we are making progress by condemning such behavior. Many Canadians from various faiths, race and economic background and so on realized that a lot more still has to be done when it comes to respecting and valuing people of different colours, faiths, LGBT, disability and so on.

We still have a long way to go before not only within Canada, but as well as in other parts of the world that all people should be judged by their character instead of their skin colour.