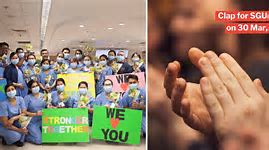 Is there a bigger underlining message during these uncertain and challenging times of COVID 19?

This novel coronavirus  pandemic has created much chaos and misery for billions of people, rich and poor,  around the world.  And the one-time thriving economic climate has nearly come  to a grinding halt as governments worldwide attempt to pump large amounts of money into the system to keep it afloat.

Prior to these unprecedented times, many people around the world, especially the youth,  not only worshiped but looked up to celebrities and athletes as their heroes. I believe the real heroes all along have been the medical personnel, alongside other first responders to care for the sick and dying. In Italy alone, over 60 doctors have died after contracting the disease.

And let’s not forget other essential workers such as the farmers, grocery store workers, truck drivers, custodians, bus drivers and so on who was rarely given any importance until now.  And teachers in many countries are now grappling to give lessons online, but sadly not every student or even school has the internet.

I think one of the underlying messages during this COVID 19 is that no matter what is one’s religion, age, socioeconomic, skin colour, sexual orientation, education, disability, etc., it attacks everyone the same. Whether one is a prime minister, a billionaire or living on the streets, this virus does not discriminate.

Many recover from the virus that often affects a person’s lungs and airways, however, the majority of the elders have been hit the hardest. According to the World Health Organization, over two million people worldwide have been infected, just less than 150,000 have died so far and 560,000  have recovered.

Despite the upheaval in people’s lives, this virus has definitely brought some unity among humanity. It is teaching us that we are all connected, one body and hurt the same. And in some ways, it has somewhat unified many parts of the world with love, respect and caring.

I hope people will come to realize that we are all the same and let’s focus on what we have in common instead of dwelling on our differences. It is vital to treat others in our workplaces, neighborhoods and in the world just the way you want to be treated.

Now and in the future, let’s hope that not only the average person but also world leaders, high profile personalities such as celebrities and athletes can come together to contribute and work collectively to solve world pressing issues such as climate change, poverty, and social injustices. And hopefully, billionaires can also lend their voices and resources to worthwhile causes instead solely focusing on corporate profits.

I hope this chaos will shift people’s thinking as well as organizations to find new and creative ways to help one another for the betterment for everyone, especially the ones who do not have a voice.

So once again, what actions will you take to make this world a better place? How will you treat others who are different from you? Hopefully with love, respect, and empathy.